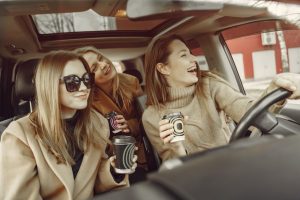 The time has finally come! We are now at the point in time where we should spend some time rethinking car interior, because car travel will never again be the same.

Ever since the beginning of car’s it’s all been centered around driving. Sure, there are buses which come in a big variety of configurations, but for cars the story has pretty much been the same all the way along.

OK, I’m jumping a bit ahead of time here. Car’s aren’t really self driving yet, but we’re getting close, very close, and rather soon the day will come when they drive all on their own and there will be no need for anything such as a driver. Hence, if we start thinking about it now, we’ll know what to do when the day comes.

Let’s bring in a dining table!

No, I’m serious! It’s the perfect idea! If nobody has to drive anymore, lets enjoy our time in the car and have a nice dinner.

For sure you’re thinking now that it will be a bumpy ride with food and drink flying around everywhere, but that’s when the car is driven by a human being.

Robots are not like that at all. They don’t have minds of their own and they are much better at planning and following rules than we are, so we can simply program them to drive softly as to not get soup and expensive wine everywhere.

We may still be forced to use seat belts, but that can be accommodated as can all the other requirements that authorities will put up. We simply need to be creative.

So, let’s start working, right now, on making this brilliant idea into reality. It will take some thinking and design work but there is time still for that.

Here’s a short list of things that will have to be developed:

Apart from this there isn’t much to do but bring the food to the car at the beginning of the trip, but there are ways to do that, already.